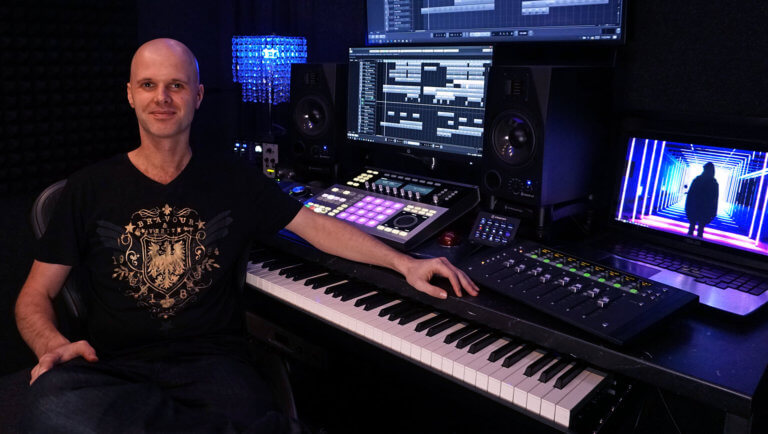 Someone recently asked me this question on Quora and I realized that most people no longer remember the real definition of a music producer. The term has been watered down to the point that any person with a Macbook and a mic calls them self a music producer… The are usually wrong though.

So what does a Music Producer do?

This means, they have the vision for how the whole song should sound and help the artist get there. This also often involves recording the vocals, editing and mixing the whole song as well as for urban genres, creating the instrumental/beat.

The difference between these other activities though, although they may also be able to do them, they care about the end product just like the director of a film.

Some music producers don’t even play anything at all. For example, David Guetta, who had lots of hits without actually playing the music himself. Producers might bring in session musicians, session singers or whatever the song needs.

Rock producers just tell the band what to play, how to play, help them with the arrangement but usually don’t play anything. They are still called a music producer but often don’t actually create any of the music themselves.

Some producers work with mix engineers and don’t even mix at all but most of them can also mix. However, it’s not a requirement.

For a laugh, here is a skit depicting what a rock producer does. It is surprisingly accurate but funny…

Beat-maker and music producer is not the same thing

If the beat-maker is also in the recording studio and they are directing the artist and helping them with their performance and songwriting, then they are a music producer. Otherwise, they’re just a beat-maker.

So now you know

So now you know what a music producer does.

David guetta was the first DJ to become promoted on a mass scale in the US as Music Producer/DJ/Artist. However, most music producers are just doing what they have always done which is work with artists and help them create better songs.

What makes a good Music Producer?

I will leave that up to you to decide as the ideal music producer is someone who is a good producer for YOU. Someone who can help see your song for what it could be. Not for what it is right now. The producer looks for the potential in the song or idea and pictures something awesome. Then helps you achieve that awesome-ness.

What type of Music Producer am I?

My name is Tom Watson and I’m the type of music producer that is also a beat-maker, pianist and mix engineer. Except, unlike your average beat-maker, I custom create my beats to suit the artists song or idea or style.

This often means the artist sings or raps an idea to me and I play the piano under it to draft up an idea or beat-box something to go with it on the spot and start to picture what I can do with their idea.

Sometimes we might do it the other way around where they want me to create some music first to write over but I almost always change up my idea based on their idea and what they are doing so that we are bouncing off each other. As as soon as I hear their ideas, I’ll start to have an idea/vision for the final product and where we can take it.

I literally play in everything on the keyboard as well as play the drums on the MPC or Maschine. I don’t actually make instrumentals when clients aren’t here as I want them to be custom made to suit the artist and their song ideas.

I help the singers and rappers with their performance in the booth. If their timing is off, I will let them know. Sometimes I will rap back or sing back the line more in time.

If their pitch is off, I will play the correct pitch on the piano or tell them if they are sharp or flat on a particular note.

If I have an idea for a line that could be better I might write a lyric or sing a line or rap a line back for them to copy.

If they need more emotion or less emotion in a certain section, I will explain to them what is needed.

If they need to change up their singing or rapping style at a certain part of the song. I’ll let them know what to do.

Basically the whole time the artist is performing, I know what I want the end product to sound like and I’m just making sure the artist reaches the full potential of the song and themselves to get the best possible performance suited for the song. This is really what a music producer does and is thinking all the time.

Am I a Rock Producer?

A good producer is versatile and can do any genre and style. I’ve directed lots of bands in the past. Since I’m also a beat-maker, I love modern music, Hip-Hop, R&B, Dance, Pop/Top 40 as it allows me to do more myself which makes it easy to achieve my vision as apposed to telling everyone in a band how to play so these days I prefer to produce Hip-Hop, R&B, Dance and Pop/Top 40 artists.

To Summarize…. Is a kid with a Macbook and Garage Band a Music Producer then?

I don’t think the kid is trying to make a whole song for an artist. He is most likely thinking of randomly putting some loops together to see what happens. Most likely he isn’t picturing a final finished song while he is doing it and often, he’s never going to record vocals over it. At most he is a beat-maker but probably not a good one without playing the piano and/or slicing samples.

If however, the kid was to make a beat for a particular artist and worked with the artist to turn it into an idea that he was picturing in his head, then yes, he is also a music producer.

It’s no secret though that you don’t need a lot of equipment to be a music producer. You just need to have the vision for the song and be a good director. It might be as simple as walking into the room telling the band that you “Need more cowbell”