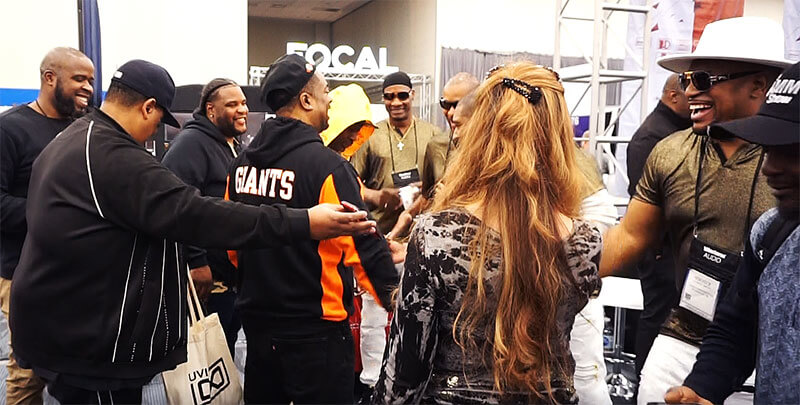 The entire 90s #1 hit R&B group AZ Yet shocked un-expecting people by jumping onto the mics in at a random booth at Namm 2020 for a secret show.

I saw a bunch of cool looking black dudes in shiny shirts chilling at Namm and thought I’d go up and have a chat to them to say hello. After introducing myself I said, “I assume either you guys are artists or you all shop at the same T-Shirt store and got a 5 for one deal or something on shiny T-shirts?” They laughed and said, “no, we’re a group, we’re singers.” I replied, “oh cool.” Then we chatted for a bit.

The guys are very friendly and down to earth, so much so that I thought they were independent artists until I asked them the name of their group and they replied, “AZ Yet” and I was like “Damm”. Then I instantly had to apologize for not recognizing them lol.

I Grew Up With Their Hits from the 90s

I explained to them how I listened to their songs growing up. We hung for a bit and then they gave me a heads up that they’re about to do a secret un-advertised performance near there in about 10 minutes. Being at Namm I had my Sony camera on me for product reviews. So I asked if I could film it and they said it was fine. I didn’t have a shotgun mic or an output from the desk so it’s just the mics from the camera.

I Was Literally 3 Feet Away from their Performance

All this meant that I had an advantage over everyone else in the audience. I knew where they were going to be before they did. So I went over to the front before the crowd surrounded them. The camera is not zoomed in. I was so close that I couldn’t even fit all 5 members in the frame the whole time. If I was a crazy female fan I could have reached out and touched them lol.

AZ Yet are so talented that they just make most modern day R&B singers look bad. While most other ‘singers’ in the trap infused R&B genre today are busy singing just a few notes with Auto-Tune, AZ Yet remind us why boy bands were so popular in the first place by singing extremely complex and tight harmonies live.

There is a reason you don’t see new famous singers just sing over a backing track without any dancers and fancy lighting. That’s because when you take those elements away, you realize they’re not that great. AZ Yet however, are maybe the opposite in that they are even more impressive when you take those elements away. I mean, they don’t even need any music at all and they can still impress a crowd.

It’s super exciting to see them performing again and they even have a new song out now which has a nice modern vibe while still being unique. I wish them all the best. Hopefully one day I’ll see them in the recording studio for a hang. AZ Yet have a new single called Kleptomaniac which they perform in the video along with their hits. It’s out at the moment.