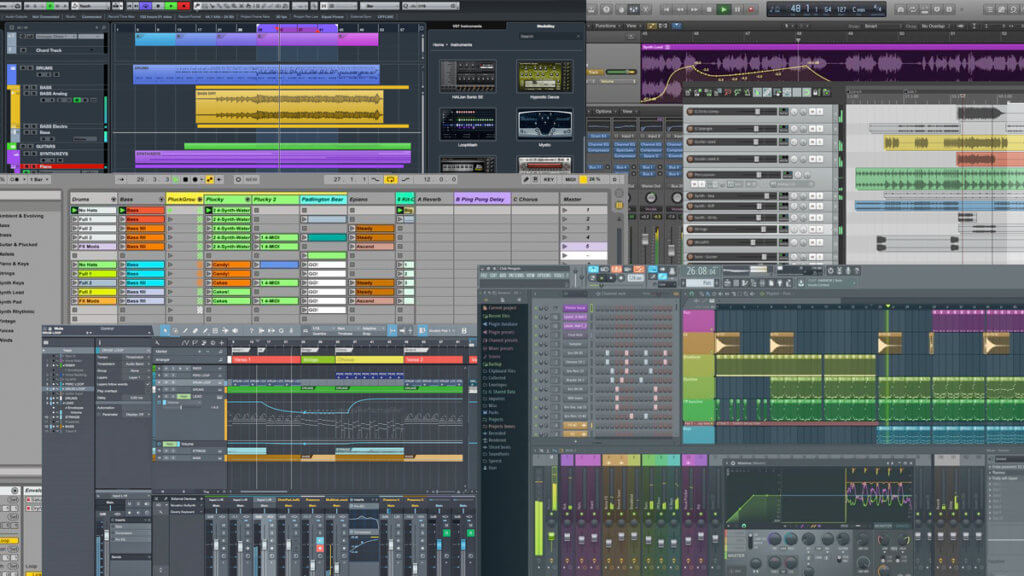 What DAW Do You Use?

This must be the most asked question that I get from those interested in recording and music production. As soon as they find out that I’m a music producer, their first question is usually always, “What DAW do you use?”

I would love to just reply with, “You’re asking the wrong questions.” Because in reality, they are. Back in the 80s and the early 90s, I’m sure if someone met a music producer they would not ask them, “What tape machine do you use?”. At the same time, thinking to themselves, “If I just buy that tape machine, I will be a famous music producer.”

Tape machines were replaced by DAWs

Since the DAW has effectively replaced the tape machine, you should think of it just like a tape machine and a pair of scissors, sticky tape plus some masking tape for your mixing desk and a marker. Now, which is the best brand marker, sticky tape, scissors to buy? It does not matter!

But… but… they do more things though, right?

Look up any blog post online about the top virtual instruments/software instruments and none of them will be the ones that come with a specific DAW. The most popular ones are those by Native Instruments such as Kontakt, Massive, Maschine and other 3rd parties such as Refx, Lennar Digital, XferRecords, Reveal Sound, Arturia, Spectrasonics, Vengeance Sound and other 3rd party manufactures.

Asking what virtual instruments they use is a much more relevant question than asking what DAW do you use.

And you still need to play them.

Just like if you had Jimmy Hendrix guitar, you need the skills to play it. Software instruments are no different. You should lean to play the piano if you want to produce music.

Most of the music in the 90s was played by producers on their hardware keyboards without using Virtual Instruments. No one back then thought of buying a keyboard and becoming a music producer without learning how to play it.

What about loops, I want loops!

The best loops are technically the ones that most people don’t have. Not the ones that every kid with Logic or Ableton has. And the ones that are musically good which are super hard to find. I personally don’t use any loops.

In saying that, Logic and Ableton give you the most loops but it gives them to everyone! So they are the most generic loops of the already generic loops. So they are not the best. But if you want lots of generic loops included in your DAW, you might want to consider those two. Cubase has loops that you can alter the midi of. Personally I think this is better but I still don’t use them.

Want to chop up loops?

Chopping up loops is a creative way to make a loop more unique and interesting. If you do want to chop up loops you should look into NI Maschine or MPC Touch/Live/X. They are the modern version of the MPC which was the hardware that was most popular for beat-making in the 90s for hip-hop.

They are hardware which comes with their own software which is a bit like a DAW. The software can work by itself or inside any other DAW as a plugin.

If you do want to make music mainly from loops, this is my best tip for you. It will help you make the loops more unique by easily chopping them up. Plus it’s more fun and quicker than cutting and re-arranging samples in a DAW.

You can use it as a plugin in any other DAW later when you need to record vocalists, musicians, cut up takes and do a full mix. The Maschine and Akai MPC software is mainly just for beat-making.

But what about effect plugins? EQs, Compressors, Reverbs, DAWs have plugins

Freelance engineers tend to find specific plugins they like and they can use them in any DAW. Just like in old days where you’d have loads of 19″ racks for mixing, (which are still used for tracking). Specific mixing boards in the studios that certain engineers preferred the sound of over others. It is the same for plugins. Especially for those that emulate famous old hardware. Things are just turning more digital with more songs being mixed on the computer.

No DAW has the ‘best’ plugins

So let’s get one thing straight here, no DAW has the ‘best plugins and virtual instruments’. So that should not be a reason to choose a particular DAW.

Every DAW can load the ‘best’ virtual instruments and plugins

All of the popular plugins, whether they are virtual instruments or effects, work in every DAW.

You can literally use the same plugins and software instruments in every DAW. Most DAWs use the Steinberg invented VST2 and VST3 formats. Pro Tools and Logic have their own formats but most paid plugins come in all 3 formats.

It does not matter what DAW you use!

So whether you are recording at home. Producing or creating electronic music. It does not matter what DAW you use. You won’t become the next Avicii, Calvin Harris, David Guetta, Diplo, Skirllex or Khalid based on what DAW you use.

For example, Avicii used FL Studio (previously called Fruity Loops). He didn’t do most of his own mixes, he just did the production and sound design.

What you put into it, is what will come out of it

Just like the tape machine, jump on a keyboard and bring up your favorite virtual instrument in any DAW. You can record and edit the same in all of them.

Whether you are recording a vocalist or full band, you can do that in every DAW.

Avid has always ruled scene for the hardware control surfaces for mixing. Until Euphonix came around and it looked like they were going to take over. So Avid bought Euphonix.

Eucon, which was invented by Steinberg in collaboration with Euphonix prior to Avid’s acquisition, allows all new DAWs to talk to Euphonix and now Avid’s hardware.

So if you’re starting a new studio, all the new Avid controllers will work in any DAW so you’re not locked into using Pro Tools.

So what DAW should I use then?

I would normally reply to this question with.

Do you want to Collab?

Do you want to collab with other producers in your area? Then just use what they are using so you can share sessions easily.

Have a small budget?

Are you on a budget and have an Apple computer already? Apple computers cost more than PCs but you can run Logic Pro X on it and it only costs $200 so it’s cheap and gives you lots of plugins for the price. They aren’t as good as 3rd party plugins but it gives you a lot of plugins.

Logic, Cubase and Ableton all come with lots of virtual instruments included but I’d give the edge to logic on this one.

I hate pre-made loops. They are generic and usually suck. However, Logic and Ableton will give you the most loops followed by Cubase and Studio One.

Want to record in one studio then mix at home?

If you want to record in one studio then mix at home or do remixes of other songs? You can still use any DAW you want. The studio will bounce the tracks down for you.

The main differences between DAWs these days is workflow. Some tasks are much easier to do in some DAWs than in others. To see which ones you like the best, just checkout their youtube videos.

Whichever one you use is up to you. From a producer standpoint, they can all have the same sounds, instruments and plugins.

It’s the skill of the producer in terms of their

That makes a good song. What DAW they use has 0 effect of their end product.

If you want to know what DAW I use

I personally like Cubase because I like the workflow. I like the built in preset management which I use to save and load my favorite and custom patches for synths. As well as the speed for comping vocals and other instruments which I find faster than in the others. It can be used for recording full bands with most of the Pro Tools editing and bussing features. It also has more midi and virtual instrument edited and organisation options than in Pro Tools.

I have Pro Tools for compatibility with other studios that I also work in and I use it when needed.

I’ve worked for studios in London where I had to work in Logic so I can use Logic Pro X. I use it when working with or for other producers or studios that use Logic.

In all the DAWs I use, on my computer I use the same 3rd party plugin in all of them. So it’s only the workflow and technical side that I have to change and adapt to.

It doesn’t matter what DAW I use

The only thing that matters is what DAW to do YOU like?

If you don’t know or haven’t used them, grab a demo of all of them. See which one you like. Watch some youtube videos. There are pros and cons to each but they’re all very similar. You can great or terrible music in all of them.

What DAW do you like the workflow of and why?