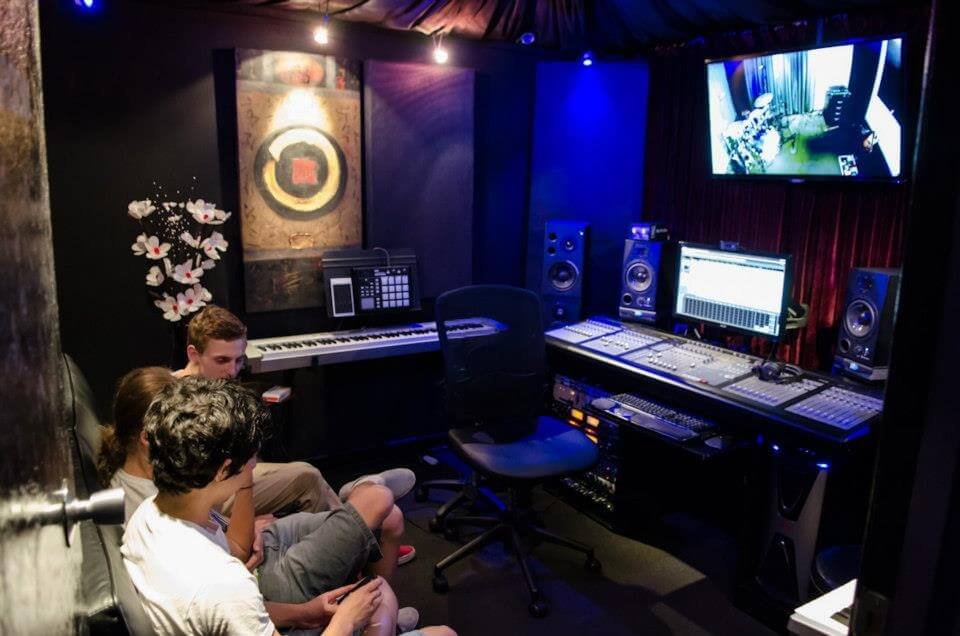 After playing to over 25,000 people, 50 in the City play just to Tom in the Current Sound studio.

Note: this is an archived post back from when Current Sound was based in Australia. Current Sound has since re-located to Hollywood, Los Angeles.

50 in the City (named after the Adelaide speed limit) are easily the most talented 17 and 18 years old musos in the Adelaide music scene. Their impressive list of gigs and awards continues to grow, just 2012 alone they won 1st place in the 2012 Burnside Battle of the Bands and Red Bull’s Bedroom Jam.

Where can you hear them?

They are always playing somewhere around Adelaide and I found it interesting that their last gig was to over 25,000 people at Carols by Candle Light then they came into the studio to play just to me. Probably a bit of a letdown after a gig like that. It reminded me of the scene from Flight of the Conchords when the band only had one person to play to at a gig one time and that man had 2 shopping bags on the seats next to him so technically most of the audience was shopping bags. The guys from 50 in the City soon got over it after I tuned and miked up their Pear Reference Series drum kit and it was sounding amazing.

The drum overheads needed very little EQ thanks to the great sounding drum kit and my German made SPL Gold Mike preamp. Those that are familiar with the sound of 50 in the City, other than their tight playing, you will notice that they have a very unique snare drum sound. They use a Pearl Custom Alloy SensiTone Elite, with 8 snare wires removed and an Evans Power Centre Reverse Dot head.

I would normally put a gate on the tom mikes but I was getting a nice spill from the snare into the mikes that it sounded better not gated. It actually made me realise that perhaps I should have more than my usual top and bottom close snare mikes for their sound so I added another condenser in front of the drum kit facing the snare to capture more of the sound of the front of the kit. I had to be careful to measure distances between mics so that there were no phase issues doing this. I ran it through a warm tube pre and tube compressor which helped dull the cymbals while tracking but still bring out the unique pop sound of their nice snare.

The guys from 50 in the City are used to studios and playing to a click so we used a click track for their songs. One of their songs speeds up at the end. We tried recording that section first without a click. I thought it could sound tighter so once I got their tempo from used a bpm tap counter I then made them a custom click on a tempo track that speeds up at an even amount. We all thought it sounded much tighter playing to the click that speeds up so we ended up using a click track there as well.

Most of the bass was tracked live with the drums, a few sections were overdubbed later. Will wanted to get the right expression from his guitar parts so we overdubbed the guitar with him sitting right next to his amp. Will wanted a full warm, upfront sound for his vocals so I gave me just that using one of my warmer USA made CAD mikes running through a Daking mic pre. The vocals required a lot of belting. Will and I felt that he was losing a bit of energy at the end of the day so we started doing some mixing in the afternoon instead of laying down the belted choruses allowing him to rest for the day before belting out the vocals the next day in the studio.

50 in the City have some great guitar solos so we spend a bit of time creating different guitar tones in the studio before laying down the solos. We recorded on some pretty hot days but luckily the bar fridge was very well stocked with soft drinks for the young guys. I’m really happy with the way the songs came out. Good luck to them, they’re definitely gonna be around for a while.