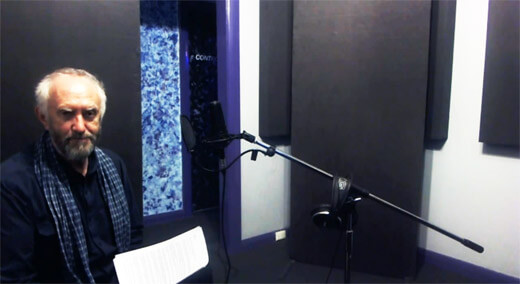 Jonathan Pryce. Pirates of the Caribbean Invade the recording studio!

Note: This is a recording session at Current Sound when the studio was based in Australia. Current Sound and Tom Watson have moved to a new location in Hollywood, Los Angeles for your recording and music production needs.

You’ve probably seen Jonathan Pryce in countless movies over the years, Pirates of the Caribbean, Evita, Tomorrow Never Dies not to mention his numerous plays. He was in Adelaide as part of the Adelaide Festival performing in his play “The Caretaker”. Which is why he’s got a beard at the moment. We were lucky enough to have him in the studio as part of a corporate recording, doing the voice overs for a popular international brand, which I’ve been told not to mention yet as the commercial hasn’t been approved.

It was interesting in having an international celebrity actor in the Australian studio in Adelaide since there are very rarely even international celebrity actors in Adelaide at all. We did the recording as quick as possible since Jonathan Pryce had to do his play shortly after that same day. It sounded great and he’s got a very cool deep voice. His corporate taxi cancelled on him at the last minute so I drove him back to his hotel in my car after the session so that he could prepare everything for his play in time and we had a nice chat in the car.